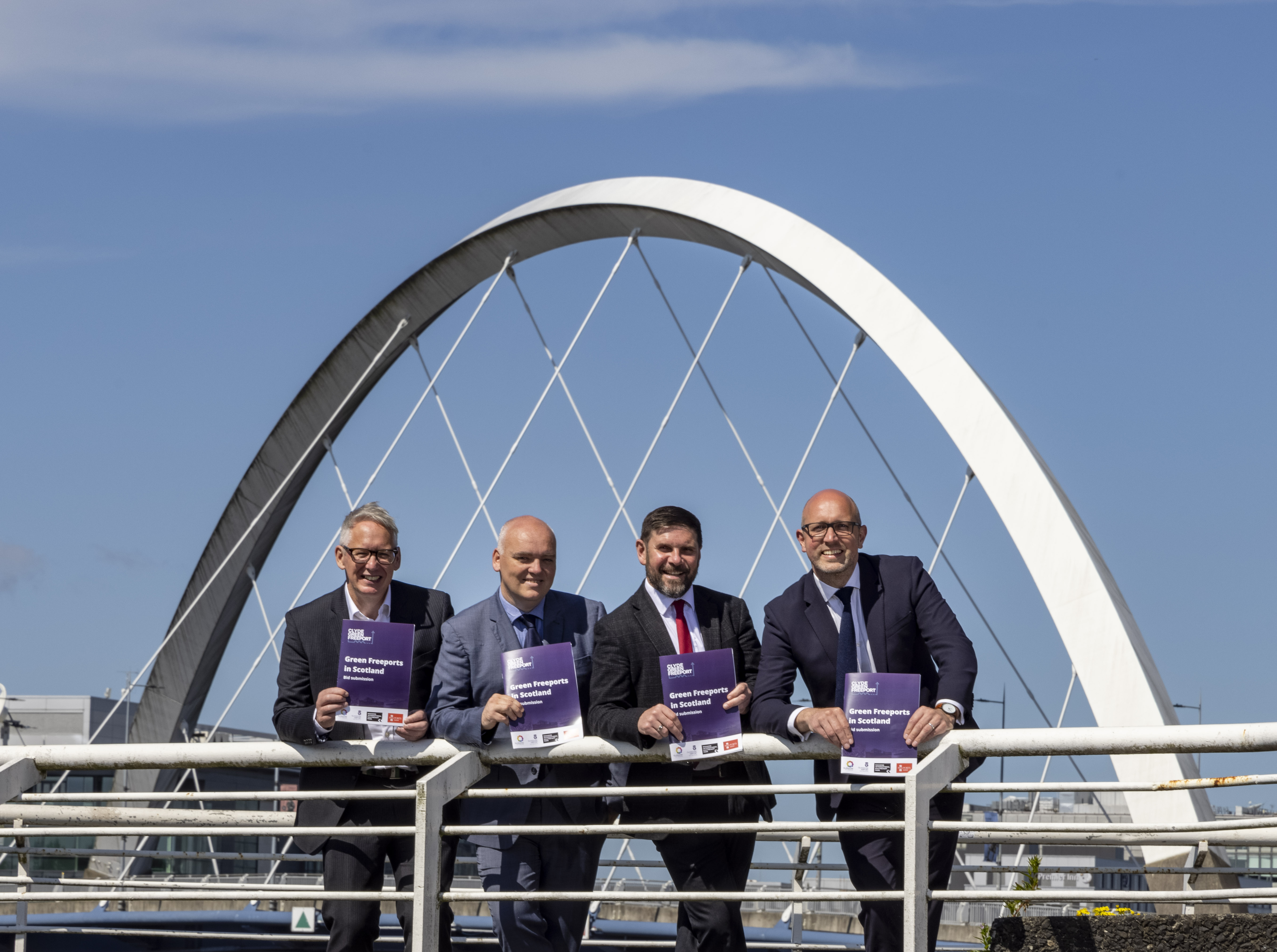 An ambitious proposal to create up to 30,000 new jobs, attract £2.5 billion of capital investment and transform nearly 600 hectares of vacant and derelict land in key locations for a new green freeport has been unveiled.

The formal bid has been submitted to the Scottish and UK governments by a partnership of Glasgow Airport, Peel Ports’ Clydeport, Mossend International Railfreight Park in North Lanarkshire and Glasgow City Region councils, including North Lanarkshire Council.

The bid has already attracted support from many key businesses and organisations based or operating within Glasgow City Region including Caterpillar, Malcolm Group, SP Energy Networks, the Universities of Glasgow and Strathclyde, Morrison Construction and Loganair.

A green freeport is a large, zoned area within a defined boundary which includes a rail, sea or airport. Operators and businesses in the zone can benefit from a package of tax and other incentives.

“Our bid is multimodal, covering air, sea and rail, and will further unlock global trade, doubling capacity to take products from across Scotland to the rest of the UK, Europe and beyond,” said Kevin Rush, Clyde Green Freeport Bid Senior Responsible Officer and Director of Regional Economic Growth for Glasgow City Region.

“It will provide an £18 billion uplift in GVA to 2034. Vitally it will tackle the Region’s greatest economic challenges - increasing productivity and generating more inclusive growth. This will be achieved through fast-tracking our world-class innovation economy and creating tens of thousands of jobs in communities across the Region with high levels of deprivation. Almost 40% of Scotland’s most deprived communities are within the Clyde Green Freeport area.

“With the biggest City Deal in the UK and the legacy of COP26, Glasgow City Region has a proven track record of delivery. As Scotland’s economic powerhouse, with unrivalled connectivity across the UK and beyond, we have everything in place to deliver a globally successful green freeport for our region, our residents, businesses, Scotland and the UK.”

Key to the Clyde Green Freeport bid is a bold decarbonisation plan which would accelerate the Scottish and UK Governments’ net zero ambitions. The Clyde Green Freeport would achieve net zero by 2040, and would include a new district heating system; waste to energy projects; renewable energy generation and projects to roll out green fuel for air, rail, road and sea transport within industries which have been dominated by carbon - including a new £1 billion hydrogen plant which could fuel 25% of Scotland’s HGVs.

The world’s first climate neutral airport cluster would be created at Glasgow Airport and the Advanced Manufacturing Innovation District Scotland (AMIDS) in Renfrewshire through plans for a solar park, district heating network, electric vehicle fleet and a multi-fuel hub. Clyde Green Freeport presents a fantastic opportunity to propel the Scottish aerospace sector towards a leading role in delivering Jet Zero air travel decarbonisation and an increased share of the additional £39 billion and 150,000 jobs associated with it.

The 185-hectare cluster includes the airport and AMIDS and is an established employment, innovation and connectivity hub which will be boosted by the opening of the National Manufacturing Institute Scotland (NMIS) and Medicines Manufacturing Innovation Centre. It will be a focus for aerospace, advanced manufacturing and life sciences sectors – all of which are high-skill, high value and export orientated – complementing major existing businesses including Boeing, Loganair, British Airways Maintenance, Thermo Fisher and Doosan Babcock.

A new state of the art cargo facility will double cargo handling capacity, enabling the airport to increase the value of Scottish exports beyond the 25% it currently handles and making a vital contribution to meeting the UK and Scottish targets of hitting £1 trillion in exports annually and growing the share of GDP generated by exports to 25% respectively.

Mossend in North Lanarkshire is home to a major rail freight hub and rail terminal. Clyde Green Freeport would see regeneration of 283 hectares of land through £17 million of investment unlocked by tax benefits and, in the longer term, £300 million to develop the site and create the infrastructure needed.

This would meet the increasing demand for exports for all of Scotland and support modal shift from road to rail, saving 225,000 tonnes of carbon annually.

Greenock deep ocean terminal would double its capacity, with more than £16 million of investment, to allow a modal shift from the 27,000 trucks which travel north to south annually as part of a bold port decarbonisation programme. This will unlock decarbonised global trade for businesses across Scotland and deliver the net zero target by 2040.

And an enhanced logistics management system will improve efficiency in vehicle movement, saving fuel and time and improving air quality.

In Inverclyde regeneration of 85 hectares of land along the River Clyde, enabled by tax site benefits, would generate £36 million of new investment to upgrade, reclaim and regenerate land that would otherwise not be commercially viable.

Upgrading and replacing legacy infrastructure will generate a hub for direct sea access, for business including sea-food processing, expansion of on-shore turbine operation in KGV, salt, cement and recycling facilities, and the drinks industry.

Ross Nimmo, Glasgow Airport’s Head of Planning and Development, said: “The connectivity delivered by our airport plays a key role in supporting the country’s economy and exporting Scotland’s goods and services to the world.

“We are a carbon-neutral airport with a clear roadmap to achieving net zero carbon by the mid-2030s.

“The Clyde Green Freeport will be the catalyst for ensuring Scotland can balance the huge economic opportunities a successful bid would bring with our country’s climate change responsibilities.”

"The new terminal at Mossend will be the first carbon free terminal in the UK, reducing the amount of HGVs coming through Scotland by 30%, which will change logistics throughout Scotland and help considerably on the essential drive to net zero," said Andrew Stirling, Peter D Stirling Ltd and Mossend International Railfreight Park Director.

“The MIRP terminal, at capacity, will save 225,000 tonnes of carbon annually, which is two thirds of the Scottish Government’s present carbon reduction target.”

James McSporran, Port Director at Peel Ports’ Clydeport said: “With its origins on the Clyde going back to 1858 initially as Clyde Navigation trust, Clydeport has been a mainstay of supporting industry by importing and exporting goods growing to 1 million tonnes of cargo from its KGV facility to 60,000 containers moving through Greenock. It remains a significant player in the development of the Clyde industrial growth and is central to the Clyde Green Freeport bid initiative, providing not only the means to service the local markets but to allow a global reach through in house connectivity to other UK ports such as Liverpool and Medway.”